Pacifism: the belief that all violence is wrong, and that war is never acceptable regardless of the circumstances.

The History of Pacifism 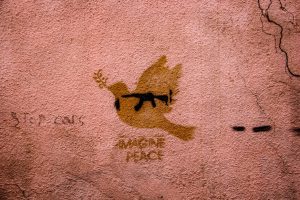 Pacifism has been around for a long time. The most notable examples are to be found within the two world wars of the 20th century. People who refused to fight were known as 'conchies'; conscientious objectors. Because of their strong pacifist beliefs, they would not engage in any violent activity. Many of these appeared before military courts; some were forced to go to war, getting into even more trouble when they refused to fight on the battlefield.

The Quakers are a Christian denomination that supports pacifism. it was founded in 1650, and from the very beginning was opposed to violence of any kind. Many Quakers were conscientious objectors during the two world wars. You can read more about their views on pacifism here.

Other pacifists have used non-violence to change things in society. Martin Luther King tackled the problems of racial segregation in 1950s America by peaceful means, including holding a series of non-violent protests. The Civil Rights Movement won many 'battles' this way, including desegregation of schools and restaurants, plus finally winning the right to vote for African Americans in 1965.

Many Christians believe that Jesus was a pacifist. A lot of his teachings were about peace, and they view him as the ultimate peacemaker. Also, there are other teachings in the Bible that show conflict is unacceptable. Because of this, some Christians become pacifists themselves. Some important teachings include:

'Jesus was still speaking when a crowd arrived, led by Judas, one of the twelve disciples. He came up to Jesus to kiss him.But Jesus said, “Judas, is it with a kiss that you betray the Son of Man?” When the disciples who were with Jesus saw what was going to happen, they asked, “Shall we use our swords, Lord?” And one of them struck the High Priest's slave and cut off his right ear. But Jesus said, “Enough of this!” He touched the man's ear and healed him.' Luke 22:47-51 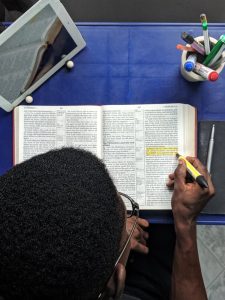 However, some Christians do not support pacifism. This is because they feel that conflict is sometimes necessary to bring about peace and protect the defenceless. Additionally, there are examples of war in the Old Testament that are seemingly supported by God, suggesting it can be an option.

Key teaching from Exodus 21:23-25 states: 'But if the woman herself is injured, the punishment shall be life for life, eye for eye, tooth for tooth, hand for hand, foot for foot, burn for burn, wound for wound, bruise for bruise.' This indicates that if you are being attacked, then it is acceptable to respond likewise, even with violence. These Christians would support a just war.

You can read more about Christian teachings on conflict here.