There are many examples of miracles in the Bible, both in the Old and New Testaments. These miracles include healing, rescue and provision of material things at times of great need, such as water and food. Over half of the miracles Jesus performed were concerned with healing, on one occasion raising someone from the dead.

Example 1: God rescued Moses and the Israelites when they were running away from the Egyptians. They had reached the Red Sea and, with the Egyptians close behind them, there was nowhere for them to go. However, just when it looked like everything was lost, the waters of the Red Sea parted, allowing them to escape. The Egyptians following them tried to come after them, but the waters crashed down on top of them, killing them all. Exodus 14:10-30 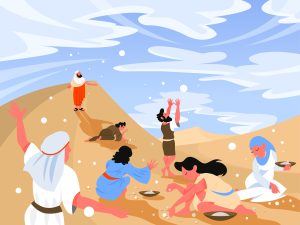 Example 2: Later, when Moses and the Israelites were wandering in the desert, they were without food. God sent them 'manna' from heaven so that they would survive the journey to the Promised Land. Exodus 16:14-35.

Example 3: The book of Daniel tells the story of Daniel's captivity in Babylon. Daniel 6 tells us about how he refused to worship the Babylonian gods, staying faithful to the God of Israel. This meant that he was breaking a new law that had just been passed in the kingdom. As a result, King Darius reluctantly punished him by throwing him into a den of lions. In the morning the den was opened up and Daniel strolled out, completely unharmed. After he'd witnessed this miracle, the king ordered all his people to fear and respect Daniel's God.

Jesus performed 37 miracles, with over half of them involving healing.

Example 1: One of the most famous healings involved the healing of a blind man. Bartimaeus had been blind since birth, but once he encountered Jesus he could see again. Mark 10:46-52.

Example 2: He also healed a paralysed man. His friends had brought him to Jesus to be healed, but couldn't get near him because of the crowds. They were so determined to see him healed that they lowered him down through the roof, placing him straight in front of Jesus. Jesus spoke, telling him to get up and go home. Which he did! Mark 2:1-12

Example 3: John 4:43-54 tells of the encounter Jesus had with an official whose son was about to die. Jesus was on his way

to Cana in Galilee when he met a government official. The official asked him to go to his house to heal his son, who was on the brink of death:

The man believed Jesus' words and went. On his way home his servants met him with the news, “Your boy is going to live!” He asked them what time it was when his son got better, and they answered, “It was one o'clock yesterday afternoon when the fever left him.” Then the father remembered that it was at that very hour when Jesus had told him, “Your son will live.” So he and all his family believed." John 4:50-53

Examples 4 and 5: Jesus also performed other miracles, such as feeding the 5,000 and calming the storm. Many people believed and followed him because of these miracles.