Christians believe that God is loving and merciful, but they also believe he is a just God. This means that he is fair, and gives to each person what they deserve based on their choices in this life.

They believe that at the end of time there will be a 'Last Judgement' where everyone who's ever lived will be resurrected and face God. At this time he will decide whether someone will enter Heaven or Hell. This is based on whether they have chosen to accept the opportunity of salvation and forgiveness offered by God, through the death of Jesus on the cross. 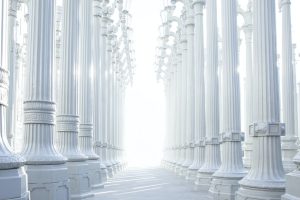 Christians believe in the Last Judgement because of what they read in the Bible. The Parable of the Sheep and the Goats, for example, supports their views. In Matthew Chapter 25:31-46, Jesus teaches about a king who sits on his throne and divides his people into two groups, just as a shepherd would divide sheep from the goats. He then explains that how the people have lived and treated one another will determine their future in his kingdom. Those who are kind to others (the sheep) will enter Heaven, those who aren’t kind (the goats) won’t.

You can read more about this parable by clicking here.

Other examples from the Bible include:

'...but they will give account to Him who is ready to judge the living and the dead.' 1 Peter 4:5

'For we must all appear before the judgment seat of Christ, so that each of us may receive what is due us for the things done while in the body, whether good or bad.' 2 Corinthians 5:10

Also, the Church teaches that at the end of times, Jesus will return and judge everyone. An example of this can be found in the Apostle's Creed:

'And in Jesus Christ, His only Son, our Lord. He was conceived by the Holy Spirit and born of the Virgin Mary; He suffered under Pontius Pilate, was crucified, died and was buried. He descended into Hell and on the third day He rose again from the dead; He ascended into heaven and sits on the right hand of God the Father. He will come again to judge the living and the dead.'