The Causes and Consequences of Inequality

Equality refers to the equal and fair treatment of everyone. Conversely, inequality refers to when people are treated unfairly and don't enjoy equal rights. There are many people across the world who suffer inequality, particularly with regard to their economic and social status. 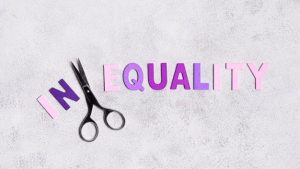 There are a number of things that can cause inequality, including:

Poverty can cause inequality on many levels. People who don't have money are unable to access education, medicines, and sometimes even basic human rights stuff, such as food, water, and shelter.

Inequality across the world can also be influenced by events happening in local areas. For example, a war in one country will often create an environment where inequality occurs, as people are less likely to be able to gain access to education and medicines. Further, their employment may also be disrupted.

There are people in the world who believe that their needs are more important than others. They will put themselves first, treating others differently. This leads to inequality.

Inequality can be caused by people treating others differently due to past experiences. For example, they may have been treated badly by someone of a different race or gender, therefore they choose to treat people of this race/gender unfairly.

When someone isn't aware that they are treating others unfairly, or simply don't care, they can be guilty of promoting inequality.

The Consequences of Social Inequality

Someone who experiences inequality will find their life chances and quality of life diminished. In fact, it is very difficult for people who are born into poverty to escape from it.

Inequality in society can create many social problems: people who are born into poverty are more likely to have poor health and low education levels. There is evidence which shows that people from lower-income families in the UK live shorter lives and are more prone to alcohol-related deaths. Substance abuse is also notably higher amongst people living in more deprived areas of the UK.

People from lower-income families are more likely to become involved in a life of crime. Furthermore, prisoners are drawn from the most socially deprived sections of society, with violence a prominent feature. According to Metropolitan Police data, in 2021 the most dangerous boroughs of London to live in were :

A society that has deep inequality, where there is a persistent presence of injustice, will more likely be unstable. This can seriously undermine society, promoting cycles of conflict, which is often seen in poorer countries across the world.

Equality is seen as one of the most important human rights across the world and is very important to Christians. To find out why Christians believe that equality is vital click here.

TASK: What do you think is the biggest cause of inequality in the world? Explain your answer.