Christian Persecution Across the World

The work of Open Doors... 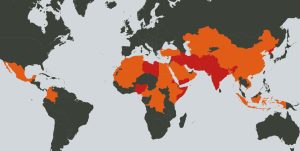 The top five worst countries to live in the world as a Christian are (data as of 18th March 2022):

What types of persecution do Christians face?

In these and other countries, Christians experience discrimination on a daily basis. They face loss of human rights, including harassment, closure of businesses and churches, beatings, arrest and sometimes even death. In many of the countries on the Open Doors list, Christians have to meet in secret as there are laws banning churches from operating.

Sadly, it is estimated that 5,859 Christians were killed last year across the world because of their faith. In the worst of these countries, for example, North Korea, many Christians are rounded up and placed in labour camps, where conditions are so appalling many don't come out alive. In other countries, Christians are simply killed for not converting to the ruling party's faith.

What does Open Doors do?

Open Doors raises awareness of the issues that these Christians face so that the worldwide Church can pray for them, whilst also raising money to help support them in any way they can. They often send Bible resources to Christians unable to buy any. Over the previous year, it has been involved in sending vaccines and COVID aid to those Christians unable to access them.