A Roman Catholic view of life after death

The Roman Catholic Church teaches that people go to Heaven and Hell, however, it also teaches that when someone dies, they go to a place called Purgatory first. They are not allowed to enter Heaven until they've spent time i 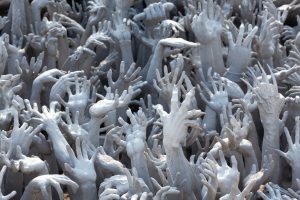 n Purgatory, which is a place where people are sent to prepare them for Heaven.

Roman Catholics believe that, when a person dies, they may still have sins or be too attached to their earthly life. Just like you wouldn’t go for a Christmas dinner unwashed and in filthy clothes, Catholics believe that you shouldn’t go to meet God in Heaven with any sin or attachments to earth. This is where Purgatory comes in; it is a place where people are cleansed.of all sins.

There is no explicit reference to purgatory in the Bible, however, The Apocrypha contains passages that support this belief. You can find out more about The Apocrypha by clicking here.

'41 So they all blessed the ways of the Lord, the righteous judge, who reveals the things that are hidden; 42 and they turned to supplication, praying that the sin that had been committed might be wholly blotted out. The noble Judas exhorted the people to keep themselves free from sin, for they had seen with their own eyes what had happened as the result of the sin of those who had fallen. 43 He also took up a collection, man by man, to the amount of two thousand drachmas of silver, and sent it to Jerusalem to provide for a sin offering. In doing this he acted very well and honorably, taking account of the resurrection. 44 For if he were not expecting that those who had fallen would rise again, it would have been superfluous and foolish to pray for the dead. 45 But if he was looking to the splendid reward that is laid up for those who fall asleep in godliness, it was a holy and pious thought. Therefore, he made atonement for the dead so that they might be delivered from their sin.'

Based on passages such as this, the Catholic Church has released statements in support of purgatory:

'All who die in God’s grace and friendship, but still imperfectly purified, are indeed assured of their eternal salvation: but after death, they undergo purification, so as to achieve the holiness necessary to enter the joy of Heaven.' Catechism of the Roman Catholic Church para 1030, 1992

All Souls Day is an annual day of prayer and remembrance for the souls of those who have died. Catholics have dedicated this day to praying for the souls in Purgatory.