Conditions for a just war...

Just War Theory: The idea that for a war to be morally justifiable (just) it must meet a number of conditions. 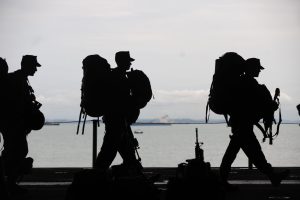 The Just War theory is used by governments as a form of guidance when considering whether a war is the right course of action. It provides a way for them to examine all aspects of a potential war, encouraging them to consider other ways of resolving conflict.

In the 4th century, St. Augustine first taught the idea of a just war as a Christian concept. He believed that the only reason to go to war was to bring about peace. Augustine recognised that war was always going to be around, but he tried to bring together the teachings of Jesus about peace, with the obligations of Roman citizens - including Christians - to fight for their country when required to.

"We do not seek peace in order to be at war, but we go to war that we may have peace." Augustine.

Conditions of a Just War

Today there are six conditions of the Just War theory that should be met in order for it to be thought of as 'just.'

What do you think of the Just War criteria? Does it influence your opinion of war? Is there anything worth dying for?