What is an alternative to euthanasia?

A hospice is a health care facility dedicated to the care of terminally ill patients. The first hospice in the UK - St Christopher's - was established by Dame Cicely Saunders in 1967. St Christopher's Hospice was the first health care facility in the UK that connected medical pain control and compassionate care, to provide a place specifically for the terminally ill go to in order to end their life with dignity, surrounded by care.

Today there are over 200 hospices in the UK, which support c.225,000 people with terminal and life-limiting conditions in the UK each year. 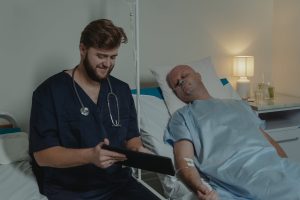 Many of them have been set up by Christians who believe they are the best alternative to active euthanasia. Roman Catholics in particular, are active in the hospice movement.

Hospices are not funded by the government. They are paid for by fundraising, donations, and money left in wills. Sadly, there are not enough hospices to meet the demand for beds.

What do hospices do?

The purpose of hospices is to care for and support terminally ill patients, alongside their families and friends. There are 3 main aims of hospice care:

The hospice movement believes that the patient is still living and should be encouraged to have a life even while they are dying. In a hospital, the patient wouldn't be given the personal care he/she would receive in a hospice. For example, in a hospice, hairdressers come in and patients can have manicures. They are encouraged to get dressed and get up rather than stay in bed.

The first time a patient may only stay for a couple of weeks to give their carers a rest or to sort out the correct pain relief. As the illness progresses, he/she might stay for longer. If they wish to die at home, nurses attached to the hospice can often support patients at home. Many who do not support euthanasia believe that hospices allow people to die with dignity.

If the pain is kept under control, the individual can live a quality life, right up until the moment they die. Many Christians support the hospice movement and believe that if there were enough spaces available for all who wished to go there, that euthanasia would not be needed.

You can find out information about a working hospice here.

Or google 'hospice' in your area to find out about a local example of one.

Did you know? Dame Cicely Saunders set up St. Christopher's Hospice in 1967. She believed that hospices mean euthanasia is unnecessary. In her words,

'Anything which says to the ill that they are a burden to their family and that they are better off dead is unacceptable. What sort of society could let its old folk die because they are in the way?'