Sermon on the Mount: Promises

What did Jesus say about making promises?

"It's the God's honest truth."

Jewish people made many promises by swearing oaths or making vows. It was a way of trying to persuade someone they were telling the truth, covering up a lie or reassuring someone that what was being promised would all work out fine. People could be very superstitious, so using God's name could seem to validate a promise.

Jesus highlighted how important God's name was in his teaching during the Sermon on the Mount. He based it upon God's Commandment to the Jewish people in Exodus 20:7:

‘You shall not misuse the name of the Lord your God, for the Lord will not hold anyone guiltless who misuses his name.'

Jesus was saying that God's name is so holy it should not be dragged into petty disputes, used as security in fulfilling a promise or used to cover up wrongdoing.

Jesus says that people should speak plainly, tell the truth and be clear in what they mean. 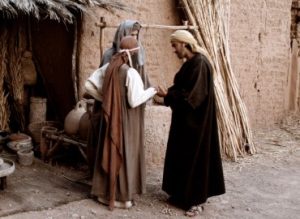 ‘Again, you have heard that it was said to the people long ago, “Do not break your oath, but fulfill to the Lord the oaths you have made.” But I tell you, do not swear an oath at all: either by heaven, for it is God’s throne; or by the earth, for it is his footstool; or by Jerusalem, for it is the city of the Great King. And do not swear by your head, for you cannot make even one hair white or black. All you need to say is simply “Yes,” or “No”; anything beyond this comes from the evil one.'  Matthew 5:33-37 Picture reproduced with kind permission of Free Bible Images.