Mary Fleeson is a Christian artist who lives on Lindisfarne where she helps to run the Lindisfarne Scriptorium.

The Holy Island of Lindisfarne was key to the Christian faith being spread throughout the North of England in the 7th century A.D. and was the location of a Celtic and then later, a Benedictine monastic community.

In 633 Oswald fought and won a battle that established him as king of Northumbria. He then invited the monks of Iona, who were led by Columba, to send a mission. Tradition tells of a number of failed missionary journeys but eventually, Aidan arrived with 12 other monks and established a Celtic Christian monastery on the island.

Aidan and the monks were Irish and so the first thing they needed to do was to learn the English language. King Oswald was English but had learned the Irish language as a boy when he was forced to live in exile there. He helped the monks. Once they had learned enough of the language, the monks went out. 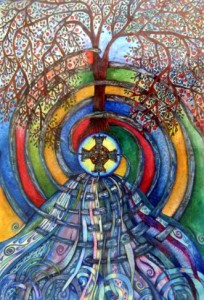 The Tree of Life

‘Scriptorium’ is the Latin name for the place within a monastery where monks copied out sections of the Bible and liturgies to produce books for use by the monastery and Churches. The monks would embellish them with intricate patterns and images to illustrate the words to an illiterate congregation and as a form of meditative worship for the creator and the viewer.

The monks of Lindisfarne are famous for the amazing work they produced, including the Lindisfarne Gospels. It is following this same tradition that Mary works.

Mary finds inspiration for her work from her own Christian faith and from the work of the monks who created wonderful books like the Lindisfarne Gospels and the Book of Kells. The ancient inspires the modern. She also studies early manuscripts and ancient calligraphy from around the world to gain an insight into how calligraphy and illumination have enhanced works, both religious and secular, throughout the ages.

The aim of Mary’s work is to draw the viewer into an experience of prayer, meditation, and blessing.

Click here to find out more about Mary’s work.

Click here to discover more about the monks of Lindisfarne. 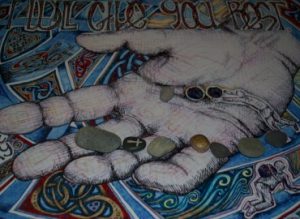 Come to Me This piece of Mary's art can be used as a prayer labyrinth. The idea is to follow the twists and turns. As Christians meet a crossover, they can ask God if there is anyone they need to forgive, anything they need to say sorry for or give thanks for.