What is the Two Saints Way pilgrimage?

The Two Saints Way is an 88 mile pilgrimage route that has been recreated between the cathedral cities of Chester and Lichfield. Pilgrimage has a very ancient history and for centuries has been an important feature of Christianity. However, pilgrimage is not solely something of history; even today each year thousands of Christians around the world will undertake a pilgrimage walk, including those who walk the Two Saints Way.

During the Middle Ages, many sites became significant places of pilgrimage for Christians. To become a pilgrimage site there was usually some connection to a saint either because they were buried there, had lived there or a relic from a saint - an object of significance - was kept there.

Within the ancient kingdom of Mercia, Chester and Lichfield were both important places of pilgrimage; St Werburgh being buried in Chester and St Chad in Lichfield. These two saints were key figures who lived at about the same time in seventh-century Mercia which at this time was a powerful kingdom.

St Werburgh was the daughter of the Mercian King Wulphere and his wife Ermenild and was born in Stone, Staffordshire. Influenced by her mother Ermenild and her aunt Etheldreda, an abbess at the Abbey of Ely, Werburgh became a Catholic. Although she was very beautiful she refused to marry and joined a convent instead. Werburgh worked hard in the convent and was eventually given the role of supervisor over all the convents in Mercia.

Using her family's money she also established new convents all around the country. St Werburgh lived to a very old age but when she did die she was eventually buried in the walled city of Chester at the church of St Peter and St Paul where her remains were safe from any Danish invaders. The church where her remains lay eventually became Chester Cathedral.

St Chad probably first arrived in Mercia from Northumbria in AD 653. However, the thought of preaching Christianity to the people of this area was a daunting one. The name "Licetfield" was then thought to translate as "Field of the Dead" because one thousand British Christians were said to have been butchered there. Despite this, Chad gathered disciples around him and spent his time travelling across Mercia preaching and converting the people to Christianity.

Eventually, King Wulfhere gave Chad the land of fifty families where he could build a monastery. Unfortunately, Chad caught the plague and died at a relatively early age. Chad was buried in the Church of St Mary's Church in Lichfield, where, according to tradition miraculous cures began to occur at his shrine. Due to these miracles, Chad soon became recognised as a saint. https://Click here to find out more about the Two Saints Way 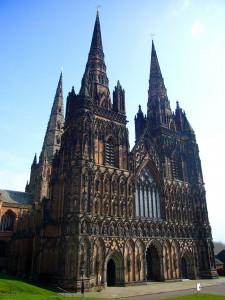 Did you know? Lichfield Cathedral is the only Medieval cathedral in England to have a Pedilavium - this is a place where pilgrims' feet were washed.

You call me Teacher and Lord – and you are right, for that is what I am. So if I, your Lord and Teacher, have washed your feet, you also ought to wash one another’s feet. For I have set you an example, that you also should do as I have done for you. (The Gospel of John, chapter 13, verses 14-15)