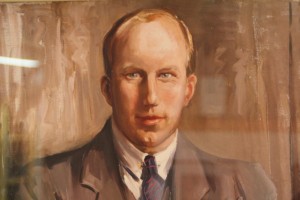 This verse from 1 Samuel could be seen as the motivation for Eric Liddell's life. Scottish athlete, rugby union international player, and a missionary, Eric was born in Tian Jin, China, to missionary parents, and his goal in life was to honour God. As a sportsman Eric was known as a real gentleman - he was gentle and showed genuine concern for both his colleagues and also the opposition. At the beginning of an event, Eric would take the time to shake hands with each competitor.

Eric Liddell winning the 400m at the 1924 Olympic Games

Eric was selected for the British team at the 1924 Olympic Games in Paris. This was an opportunity to honour God on a world stage. Before he left for Paris Eric discovered that the heats for the 100m race were to be held on a Sunday. To compete on a Sunday would go against his Christian beliefs: he believed the Sabbath was a day for rest and worship not for running. People tried to make Eric change his mind, to go against his convictions and to compete. He was even accused of being unpatriotic, betraying his country.

However, Eric felt that his relationship with God was more important than a potential gold medal at the Olympics, so he decided not to run and preached in a Paris church instead. Eric went on to compete in the 200m where he won a bronze medal and in the 400ms. On leaving his hotel room for that race a member of the British team pushed a note into Eric's hand.

The note read, 'It says in the Old Book, 'Him that honours me, I will honour.' Wishing you the best success.' Eric ran the race of his life, not only taking the gold medal but setting a new world record for the 400m race: 47.6 seconds. Following on from his sporting success Eric was given the opportunity to speak at many events but his message was not so much about sport but about his faith - his motto became 'Christ for the world, for the world needs Christ.'

In 1981, a film was made about this achievement, with the tough choice he made around his faith: Chariots of Fire.

In 1925, Eric returned to China to care for the people and tell them about God's love for them. When World War 2 broke out, his wife and children left China as it was seen as too dangerous for them to stay. Eric refused to go, believing that God wanted him to stay. In 1943 the Japanese captured all the westerners and sent them to Weihsein Internment Camp.

Eric continued helping people, even in the camp. He would give up his food rations for those he considered worse off than him and even organised and referred football matches for the prisoners. Eric also encouraged his fellow prisoners not to hate the Japanese, but to forgive and pray for them. This is what the Bible teaches, and he tried to live out what Jesus taught throughout his life.

As the war continued, conditions in the camp got worse. Prisoners were overworked and had little food. Sadly, on February 21st, 1945, Eric Liddell died. He had an inoperable brain tumour, which, along with the poor conditions, no doubt led to his early death. He never got to see his family again.

A man called Norman Cliff was imprisoned with him in the camp. He survived and later wrote that Eric was, "the finest Christian gentleman it has been my pleasure to meet. In all the time in the camp, I never heard him say a bad word about anybody."

Click here to discover more about this amazing man and the work that continues in his name.

All images are reproduced with kind permission of the Eric Liddell Centre. The Centre is an Edinburgh charity dedicated to inspiring, empowering, and supporting people of all ages, cultures and abilities, as an expression of compassionate Christian values.