What can we learn about God through the story of Noah? 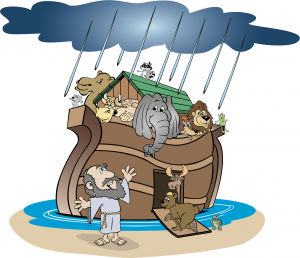 In this story there is lots of water!

One day as God was thinking about the people on earth His heart became very sad. He could see that all the people had become very bad and had stopped being kind to one another. Also they had stopped following Him.

God was very sad and he wanted all the bad things to stop.

You can read what happened next in the Old Testament in the book of Genesis.

Noah was a good man and so God gave him a special job. God told him to make an ark to protect the animals from the flood He was going to send to make the world good again.

God told Noah how to make the boat, then He told him to get on the boat with his wife and his three sons, their wives and two of all living animals - male and female! They also needed food for each of them for as long as they were on the boat.

That's a lot of animals and a lot of food.

I think it would've been a very full, noisy, stinky place to be, but they would all be safe because God promised he would look after them. What do you think it would have been like?

When the ark was done God gave Noah 7 days warning before the flood to get all the animals and food on board, and told him that He would send rain for 40 days and 40 nights.

When everyone was in the ark God shut the door.

Then the rain started for 40 days and nights! When it stopped Noah and the animals couldn't just leave the ark. There was too much water and no land for them to walk on, everything was covered. The waters flooded the earth for one hundred and fifty days, which is about five months.

Noah decided to send out a raven to see if there was dry land for them to walk on yet. But the raven just flew back and forth.

Then he sent out a dove but the dove couldn't find any place to go either. Noah waited a week and then sent the dove out again. This time the dove came back with an olive leaf which meant the waters had gone down. One more week passed and Noah let the dove out again and this time it didn't return. Noah knew the dove had found dry land to live on. All the people and all the animals could get out and start a new life!

The first thing that Noah did was build a special place called an altar where they could thank God for keeping them safe. When God saw what Noah had done, he told Noah that he would never destroy the world with a flood again. Then God placed a rainbow in the sky as a sign of this promise. And God told Noah that every time a rainbow appeared in the sky He would remember the promise He had made that day.

I wonder how it feels to take care of important things? I wonder if we have ever been asked to do a special job like Noah? I wonder what signs of God’s care for us do we see today? Suggested Activities