The Bible: Joseph and His Dreams

Have you ever had a dream? Can you ever remember your dreams? What kinds of things do you dream about?

In the Bible, there is a story of a man who could not stop dreaming! His name was Joseph. Read his story here.

What do you think Christians can learn from this story? 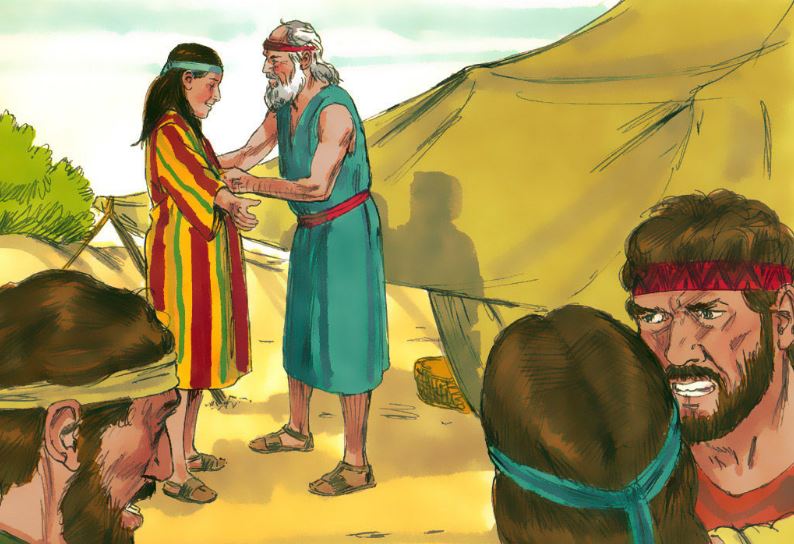 Jacob's family
There was a man called Jacob who had many sons. His favourite was called Joseph. Jacob showed him how much he loved him by giving him fine clothes - including an expensive coat made of many colours. This made Joseph's 10 older brothers very jealous indeed. 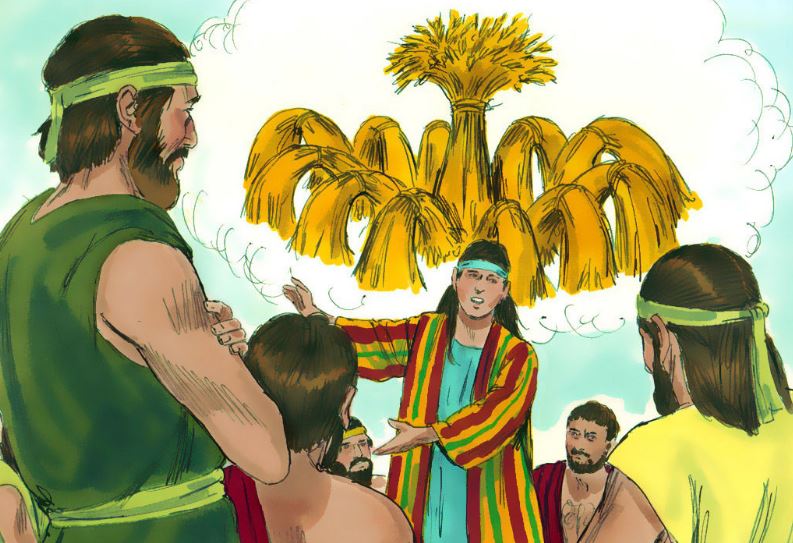 Joseph's dreams
Joseph had many dreams which he shared with his brothers. "I dreamt we were all binding corn out in the fields, when suddenly my sheaf of corn stood up - and all of yours bowed down to mine!", said Joseph. His brothers were angry. "Are you saying that we should all bow down to you?" they asked. 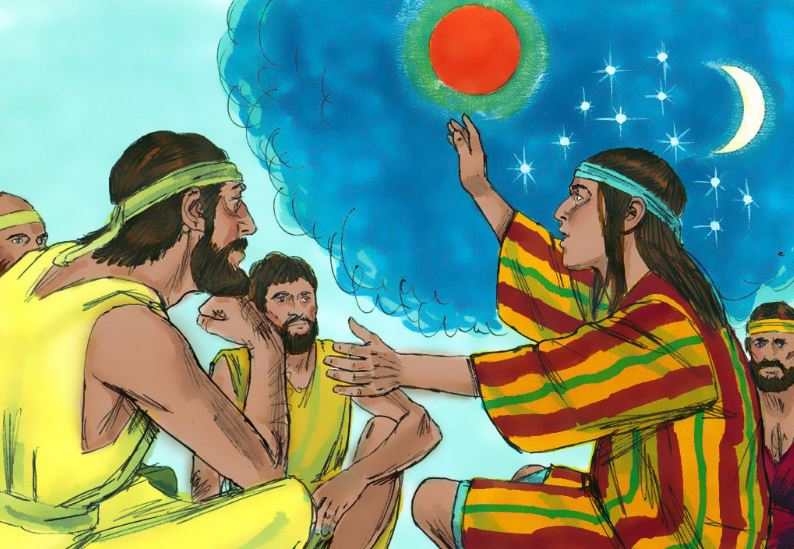 Joseph had another dream. "I saw the sun, the moon and 11 stars all bowing down to me!" This time, even his father Jacob had words for Joseph. "Will your mother and I bow down to you too?" asked Jacob. Joseph's brothers were jealous of Joseph and wondered how they might teach him a lesson. 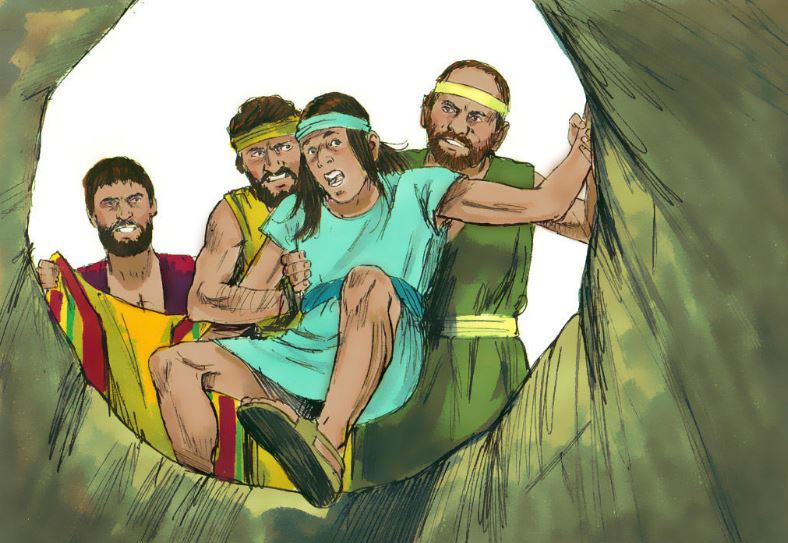 Joseph in the well
Joseph's brothers were shepherds. One day, as Joseph headed out to visit them in their fields, the brothers said "Now is our chance to sort Joseph out!" They decided to put Joseph down a well and leave him there for a little while. 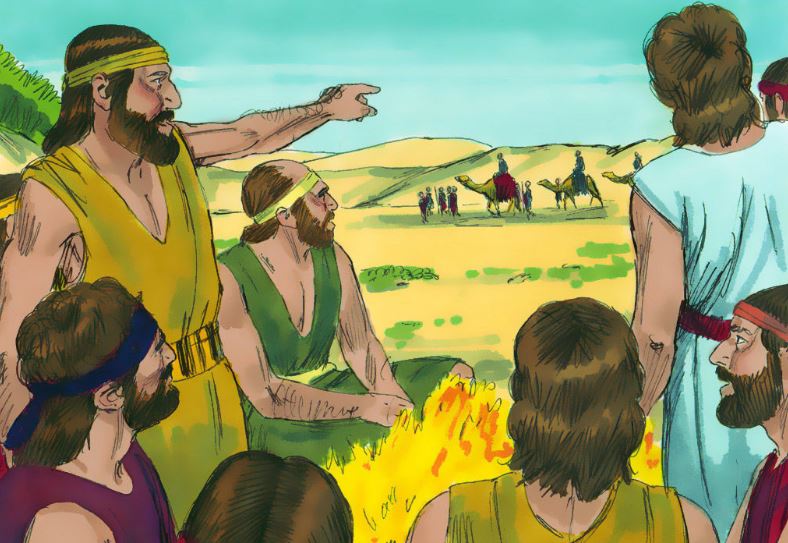 But while Joseph waited in the well, the brothers saw a group of merchants trekking past on their way to Egypt. They had an idea. "Why don't we sell Joseph to them?" they asked each other. And so they sold Joseph to the men. But the brothers told their father Jacob that a wild animal had killed Joseph. Jacob was heart-broken. 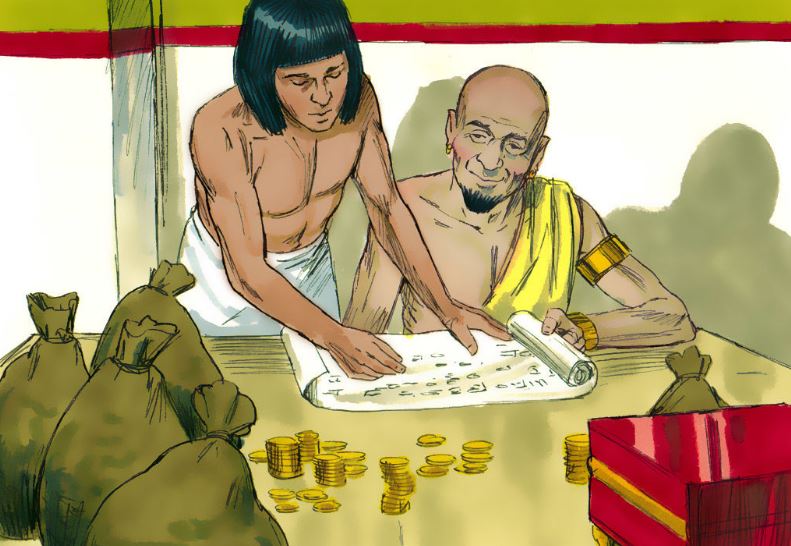 Joseph in Potiphar's house
Joseph arrived in Egypt and began working as a slave for an important man named Potiphar. God was with Joseph, and he did everything so well that he soon became a favourite in the household. Potiphar put Joseph in charge of his house and everything he owned. 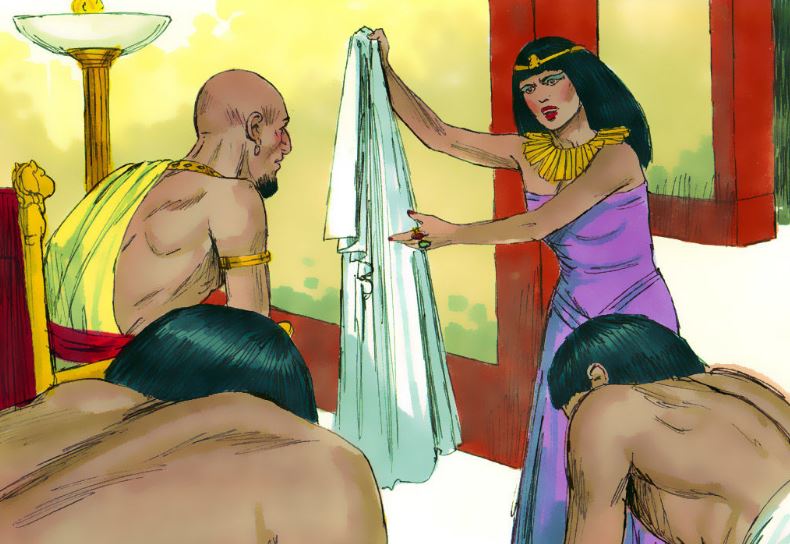 Unfortunately, Potiphar's wife was keen on Joseph. Joseph respected his master and tried to avoid her. This made her angry. Potiphar's wife made up lies about Joseph and Potiphar believed her. He sent Joseph to prison. But even in prison God was with Joseph, and soon he was helping to look after the other prisoners. 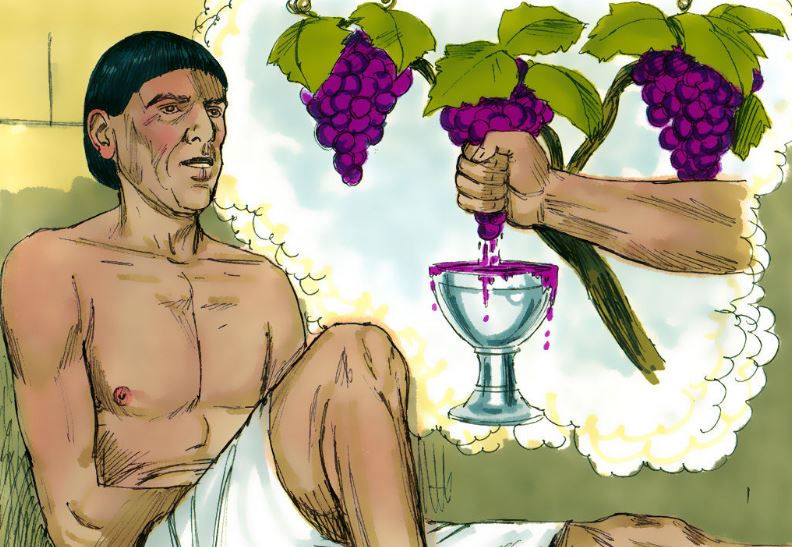 Joseph in prison
One prisoner used to work for the Pharoah as his cupbearer. One night he had a dream where he saw a bunch of grapes and a cup belonging to the Pharoah. He saw himself squeeze the juice from the grapes into the Pharoah's hands. Joseph told him what it meant. "You will soon become Pharoah's cupbearer again," said Joseph. "Please remember me to the King when you get your job back!" 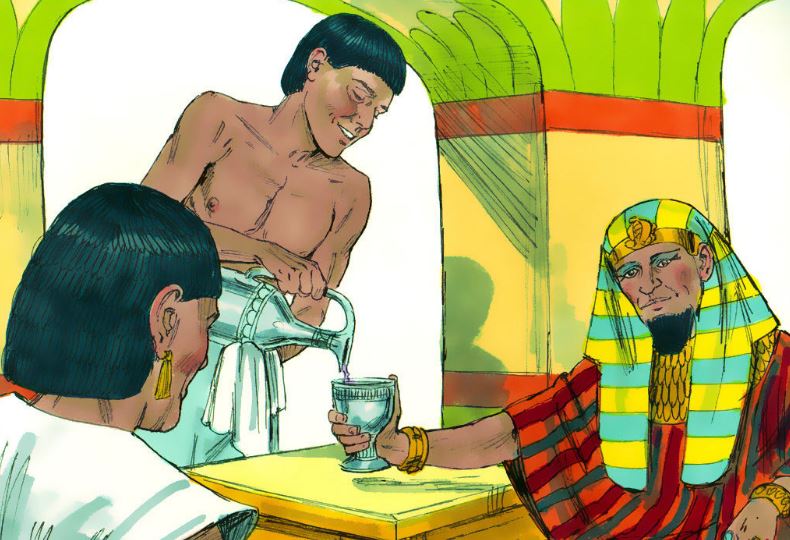 Sure enough, in 3 days time the prisoner was released from prison and working for the Pharoah again! He was very happy - but he forgot all about Joseph. That is, until the Pharoah started having some disturbing dreams himself... 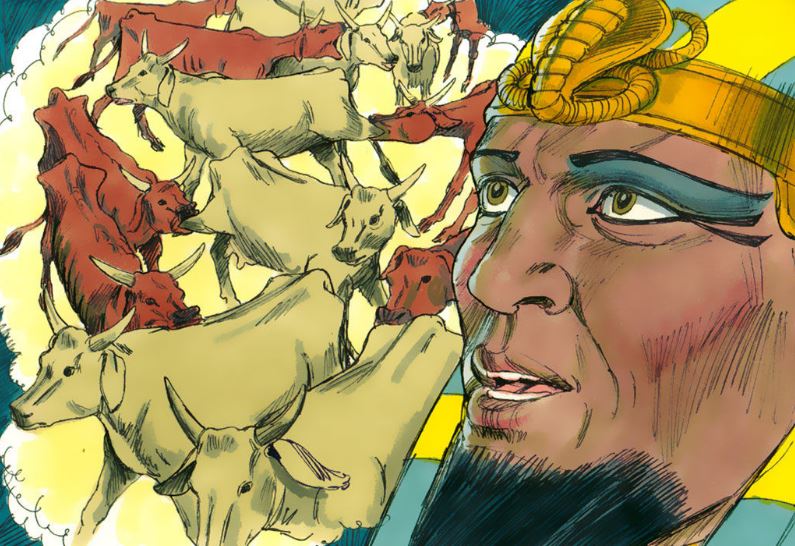 Pharoah's dreams
Pharoah dreamt he was standing by the River Nile. Seven fat cows came to drink by the river. Suddenly seven thin, ugly cows appeared behind them and ate them up. Whatever could it mean? Pharoah had another dream. Seven fat ears of corn grew on a single stalk. Then another seven ears grew. These thin ears ate up the juicy ones! Pharoah was confused and scared. 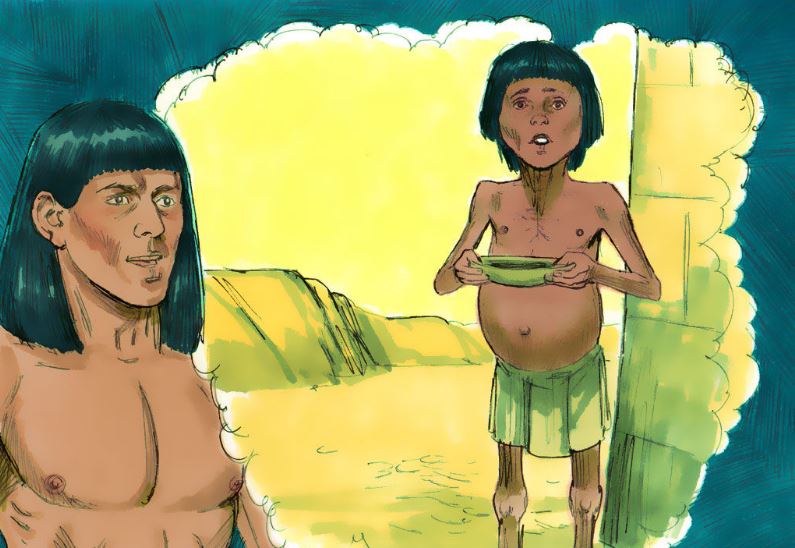 The cupbearer had an idea. "I know a man who can tell you what the dreams mean!" he said. Pharoah sent for Joseph from prison. God was with Joseph. He knew exactly what to say. "You will have seven years of plenty," said Joseph, "but this will be followed by seven years of famine where there will be nothing to eat. God is telling you this so that you may be prepared." 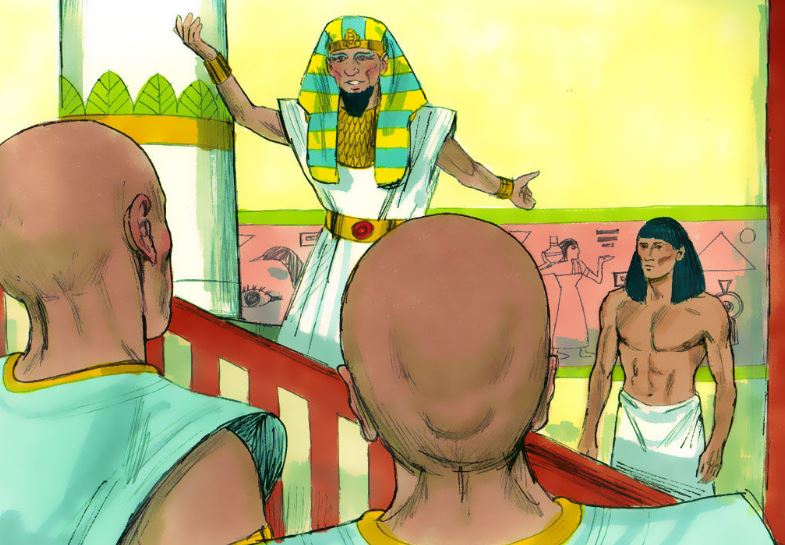 Pharoah was pleased with Joseph. "You are very wise!" he said. "I will put you in charge of all of Egypt and you will see us through the years ahead!" And so Joseph spent seven years travelling throughout the land, collecting and storing food ready for the years of famine. 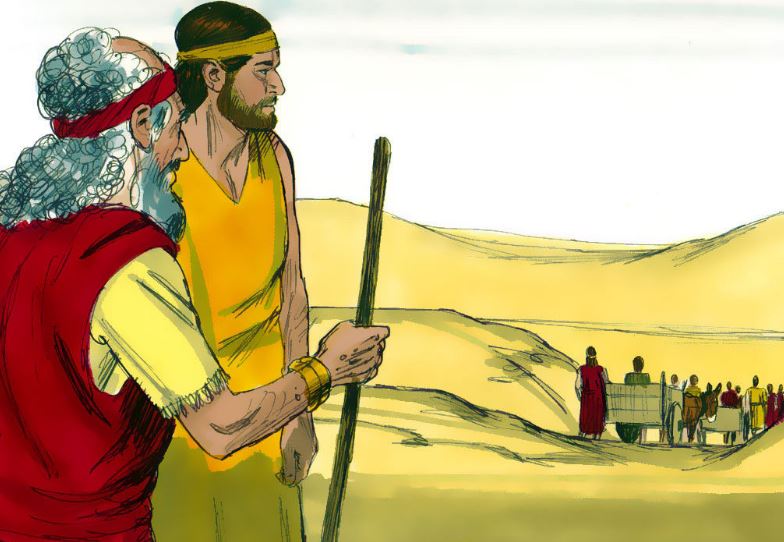 Joseph's brothers visit Egypt
Meanwhile, back in Canaan, Jacob and his sons were starving. The famine was terrible. Jacob called his sons together. "Go to Egypt," he told them. "They have food there. It is our only hope." And so Joseph's older brothers went to Egypt to beg for food. But Benjamin, Joseph's younger brother, stayed at home. 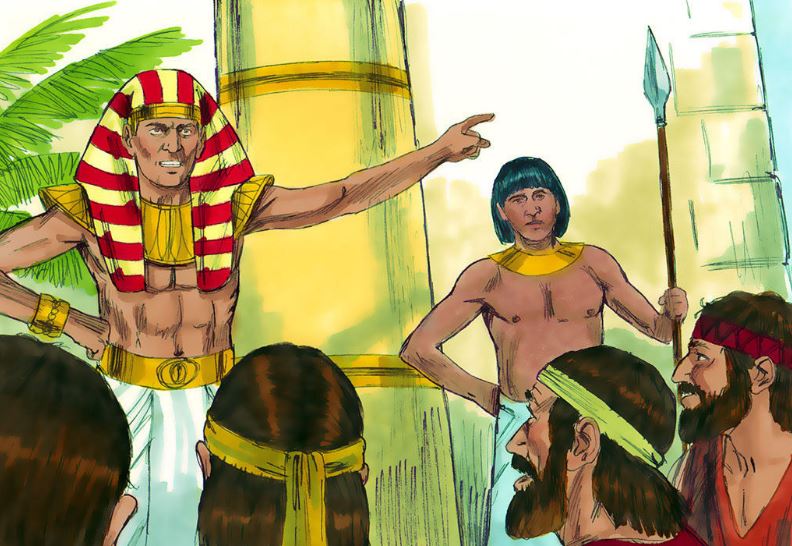 The brothers arrived in Egypt. They did not notice that the powerful leader who was giving out food was their little brother! But Joseph knew who they were. He also noticed that Benjamin was not there. Joseph had an idea. "You are all spies!" he said. The brothers were scared. "We are not!" they said. "We are brothers, with one left at home." Joseph saw his chance. "If you are telling the truth, then come back with this other brother. If you come again without him you will get no more food!" 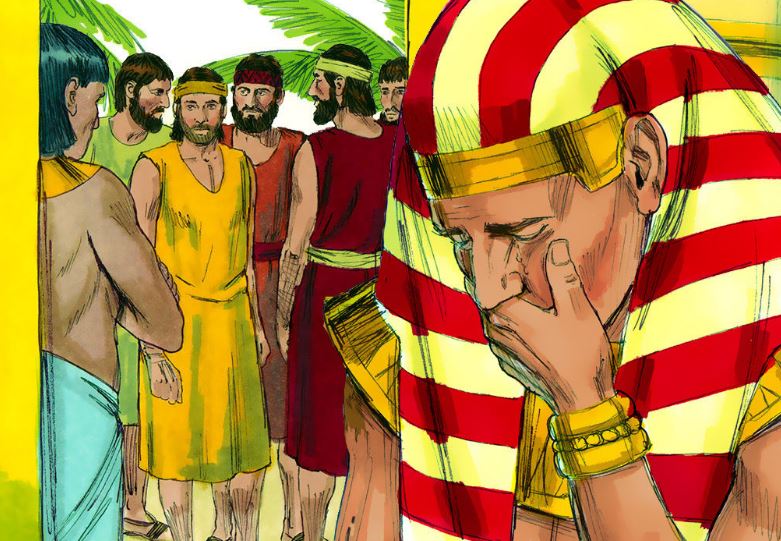 The brothers spoke amongst themselves. "How can we bring Benjamin?" they asked. "It will break our father's heart to lose him." Joseph overheard them. When he remembered his father and younger brother he wept. He had not seen them for so long. 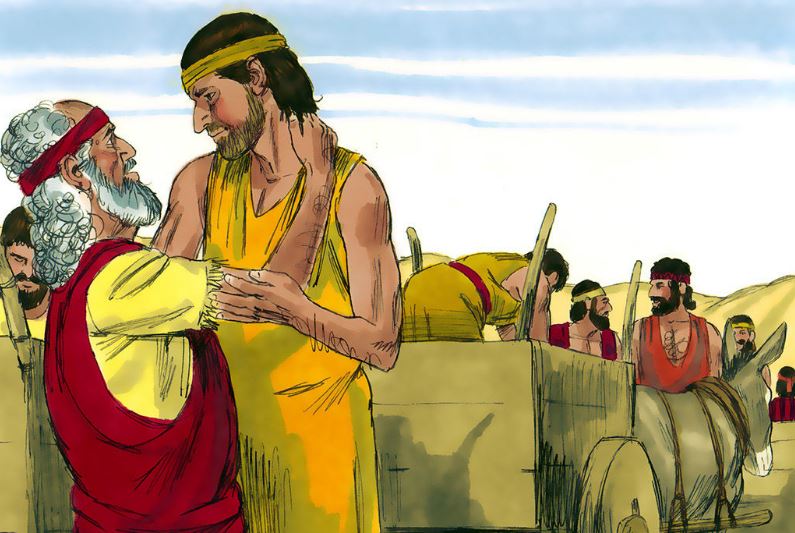 Joseph's brothers returned home. The food they brought with them soon ran out and it was time to find some more. But the brothers knew it would not be easy. "The man in charge told us we needed to bring Benjamin or we would get no food," they told Jacob. Jacob was sad. "Bring him home to me," he said, "Or I will not be able to live." Judah, one of the brothers, promised he would keep him safe. 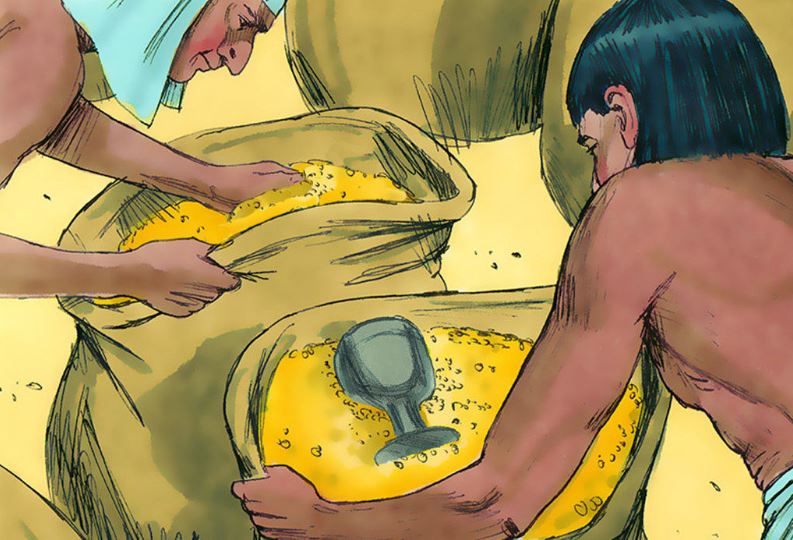 In Egypt, Joseph was pleased to see Benjamin. Benjamin and his brothers still did not recognise Joseph. They were relieved to receive sacks of grain but little did they know, Joseph had secretly put a special cup in Benjamin's sack. As they turned to leave, Joseph called out. "Wait! My cup is missing! Guards - look in these men's sacks!" When the guards found the cup Joseph acted angrily. "Put the youngest one in jail!" he cried. 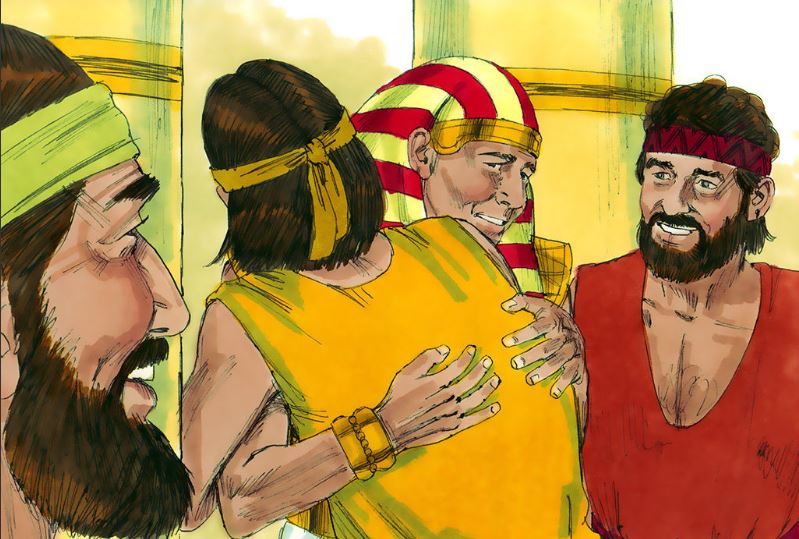 "Please!" cried Judah. "It will break our father's heart. He has already lost his dearest son Joseph. If he were to lose his brother Benjamin, our father will die. Take me instead, I beg you." Joseph knew that his brothers had changed. He immediately forgave them for the hurt they had caused him. "Your brother is not dead," he said. "I am Joseph! What you intended for bad, God has used for good." 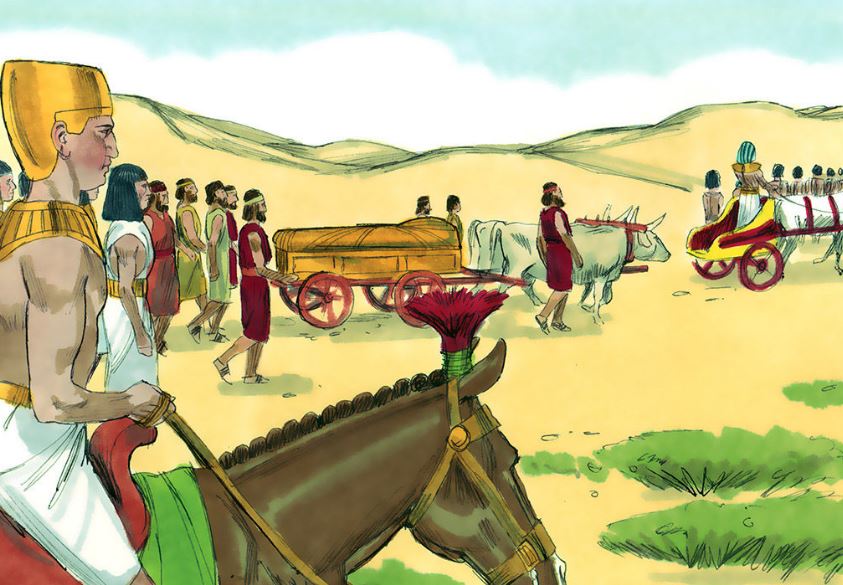 Joseph's brothers were amazed but happy. But Joseph had one more thing to say. "Go - bring my father Jacob. You must all live here with me, in Egypt. And you will never be hungry again." And so Jacob and his family settled in Egypt. Joseph's dreams had all come true. 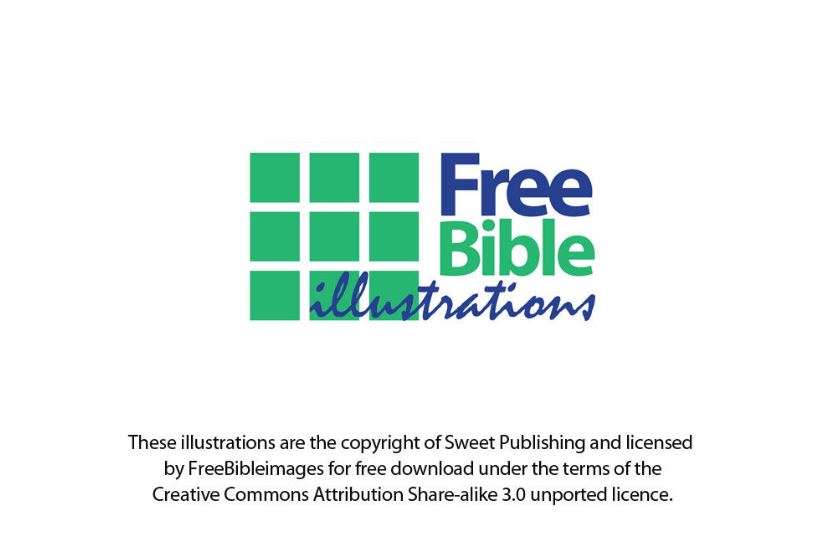