Who are your best friends? What makes somebody a good friend?

There is a story in the Bible about a young woman named Ruth. She was a good friend even when it meant she had to make difficult sacrifices.

After you have read this story, think about the lessons that Christians can learn from it. 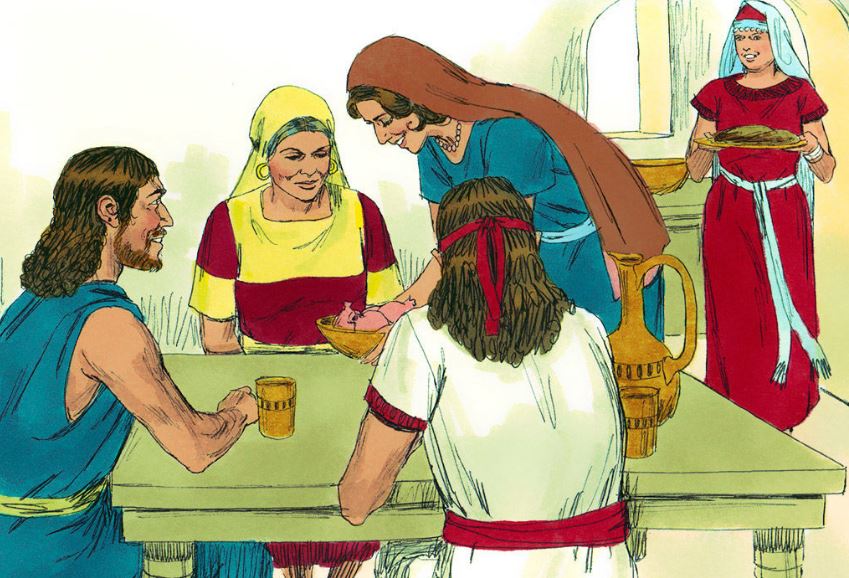 There was once a woman named Naomi. She and her family came from Bethlehem. But there was a famine in the land. There was not enough food for the people to eat. So the family moved to another country, called Moab. In Moab, Naomi's husband died, leaving her and her two sons. Soon the sons married some Moabite women: Orpah and Ruth. 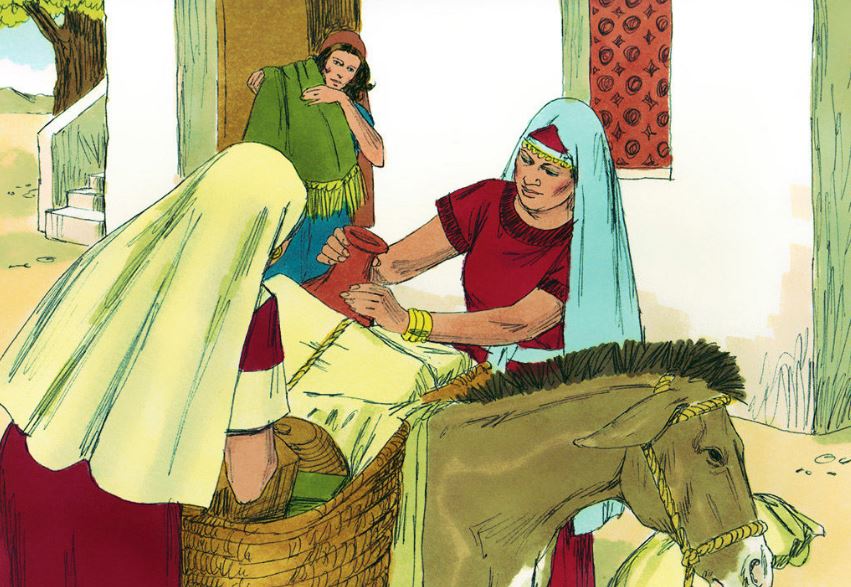 Sadly, Naomi's sons died too. She was now without her husband and sons and had nobody to look after her and her daughters-in-law. Naomi made a decision. She would return to Bethlehem. Orpah and Ruth decided to leave their home country and come with her.

On the journey Naomi spoke to her daughters-in-law. 'You must return to your homeland and your families,' she said. 'You are both still young. You could marry again. Don't worry about me.' Orpah was sad, but she agreed to return to Moab.

But Ruth would not listen to her mother-in-law. 'Don't make me leave you!' she cried. 'Where you go, I will go. Where you stay, I will stay. Your people will be my people and your God will be my God. Where you die, I will die, and there I will be buried.' Naomi knew there was no point arguing. And so Ruth went with her to Bethlehem. 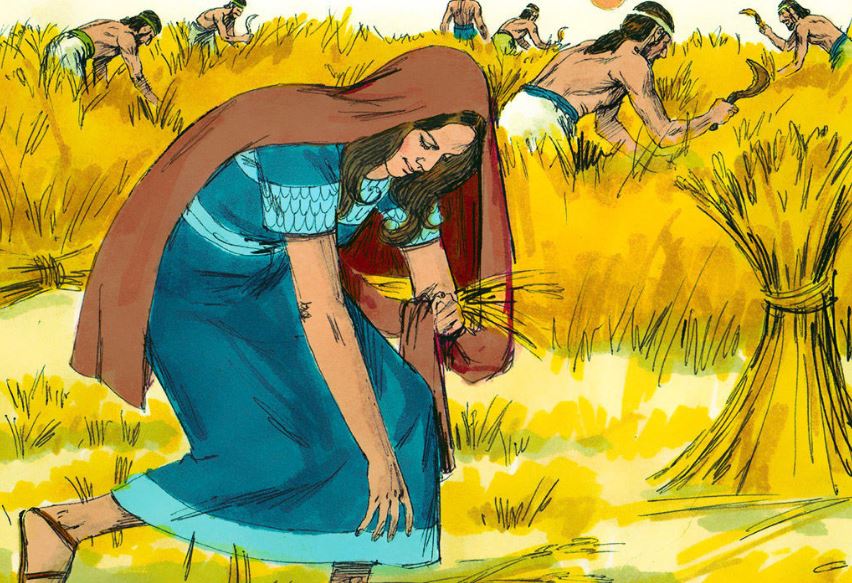 In Bethlehem, Naomi and Ruth were very poor. Their best hope of finding food was for Ruth to go out to the fields and pick up grain dropped by the harvesters. She went out to work in a field owned by a man named Boaz. Unknown to her, Boaz was a relative of Naomi's husband. 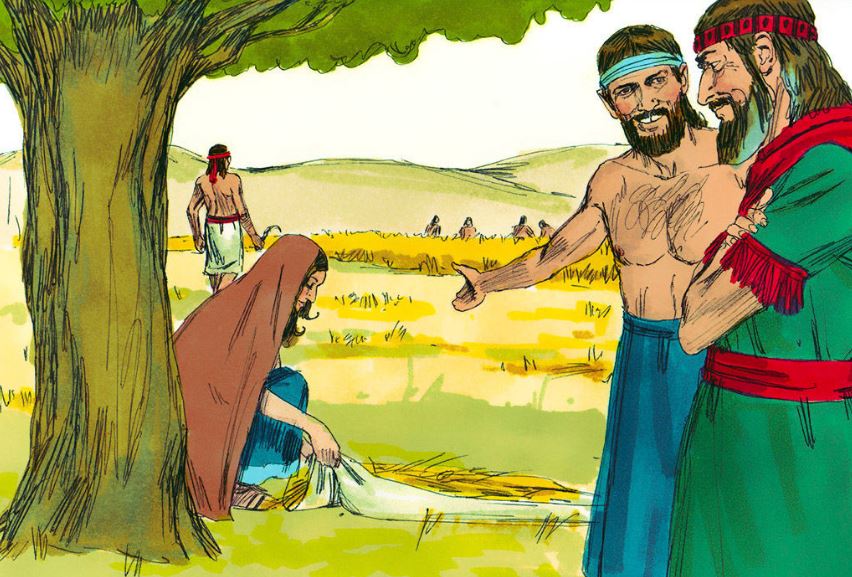 When Boaz came to visit his workers he saw Ruth. He asked his manager, 'Who is that woman?' 'It is Ruth, a Moabite who came with Naomi,' his manager replied. 'She came this morning and asked if she could pick up some of the leftover corn. She has been working hard ever since.' 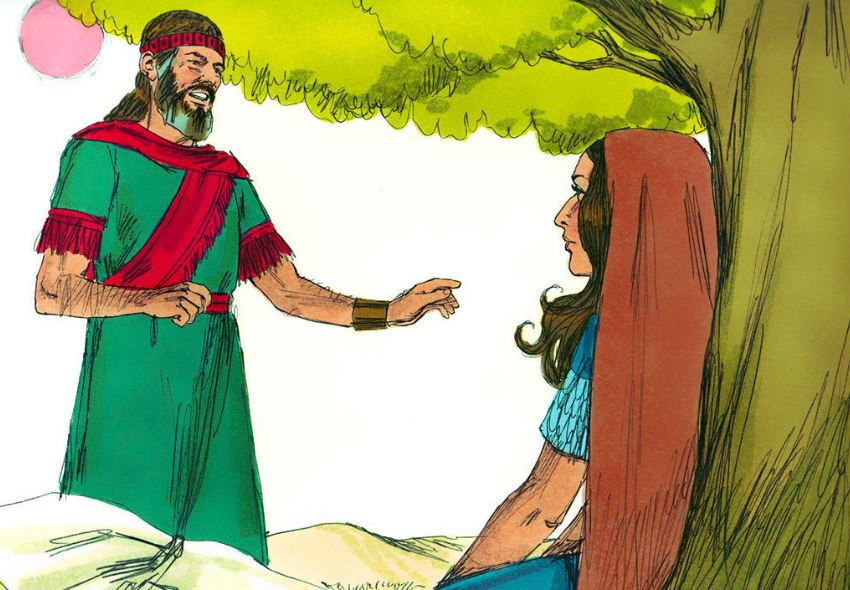 Boaz went over to Ruth. 'Do not go to any other field,' he said to her. 'You must work here. Take whatever you want, and if you need a drink, help yourself to the water from the jar.' Ruth was overwhelmed by his kind words. 'Why are you helping me like this, I who am a foreigner?' she asked. 'I have heard about your kindness to Naomi,' he said. 'May the God you have come to trust reward you for your goodness.' 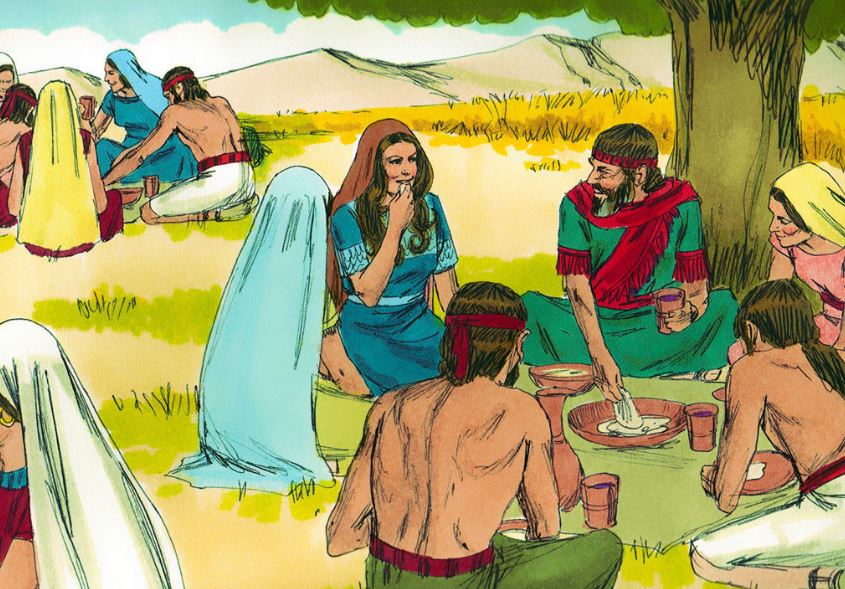 When it was time for lunch, Boaz invited Ruth to join his workers and share their meal. When she returned to work, Boaz told his men to make sure they left extra corn for Ruth to collect. He wanted to make sure she and Naomi were looked after. 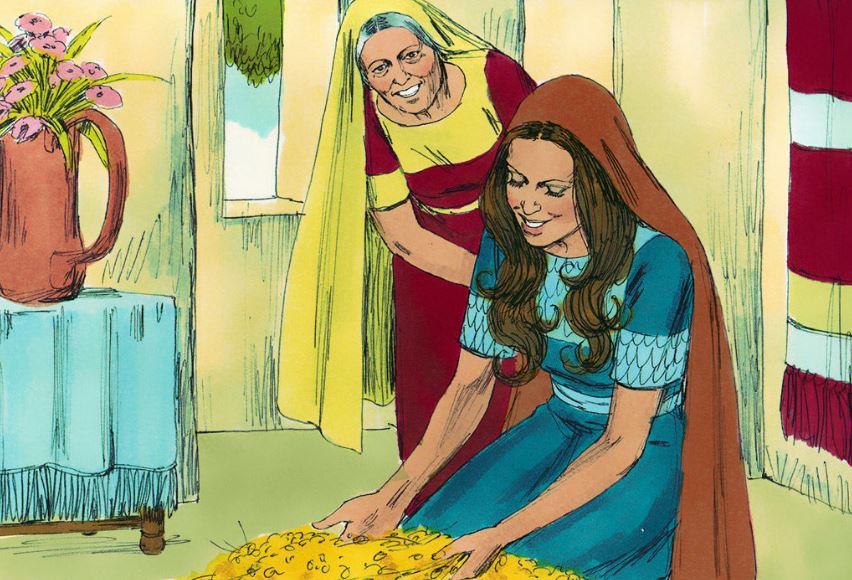 That evening Naomi was amazed at how much corn Ruth had collected. She asked where she had been. 'I have been working in Boaz's field,' replied Ruth. 'Boaz is our closest relative!' said Naomi. 'Now that I have lost husband and sons, the law says that he is the one who will look after us and save us from our poverty - our guardian redeemer.' 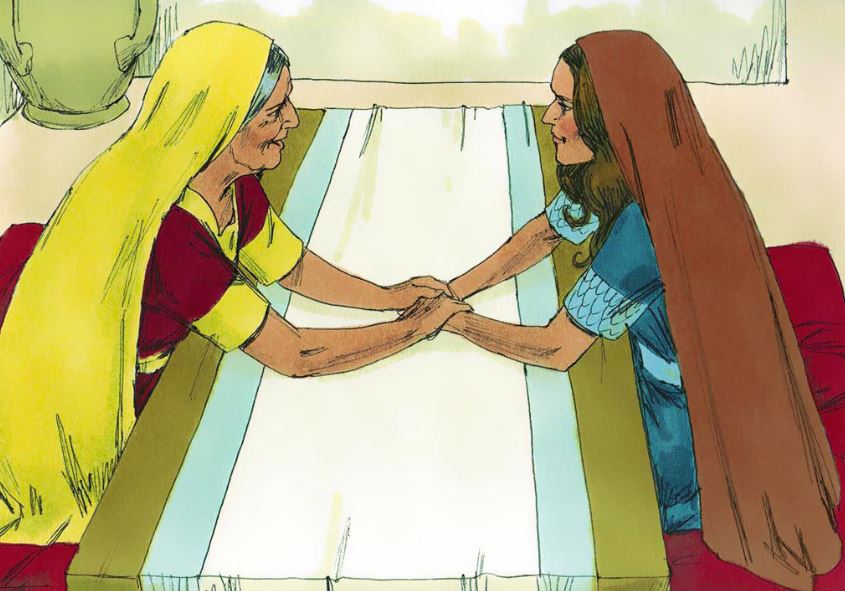 Then Naomi had an idea. 'Ruth, you must marry again. Boaz would be a good husband for you - after all, he cares about us. Tonight he will be working at the winnowing barn. Look as lovely as you can and go to the barn. When he is asleep, wait by his feet. He will tell you what to do next.' 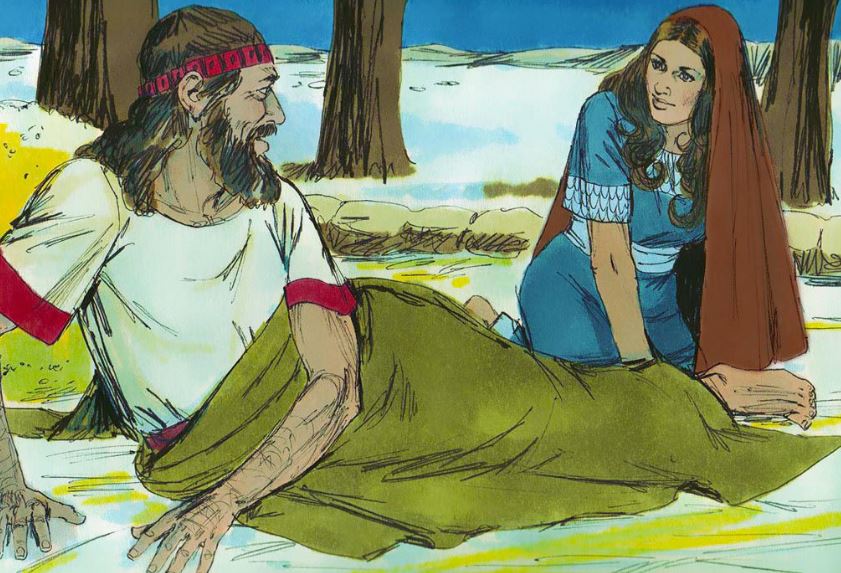 So Ruth did as Naomi said. In the night, Boaz woke up and found Ruth waiting by his feet. He knew that she was offering to be his wife. He thought very highly of Ruth. As a close relative of Naomi's family, he also knew that he had a duty to marry Ruth and look after them. 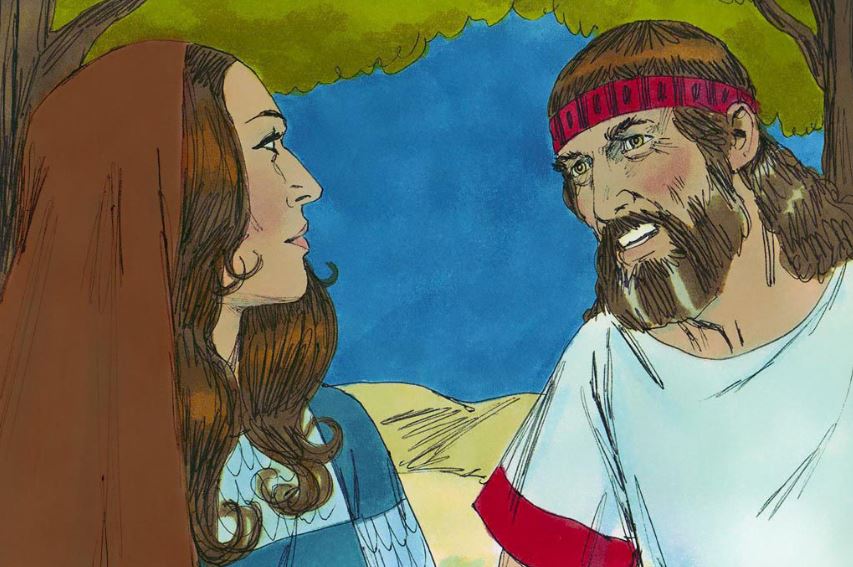 'You are a good woman,' he said to Ruth. 'Everybody knows it. You could have married anybody, but you have chosen me. God will bless you for this kindness. I will help you. There is another relative - closer than me. If he wants to do his duty and marry you, good. But if he will not, as surely as the Lord lives I will marry you.' 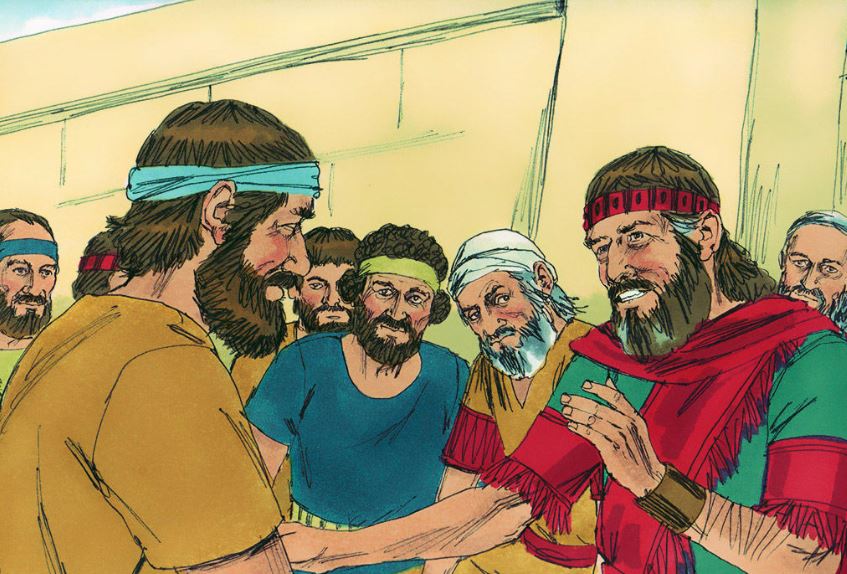 The next morning Boaz set out to find his cousin. He explained the situation. But the man was not willing to help. It was settled. Boaz would be the one to help Naomi and Ruth. He would marry Ruth and give them back the life they had lost. 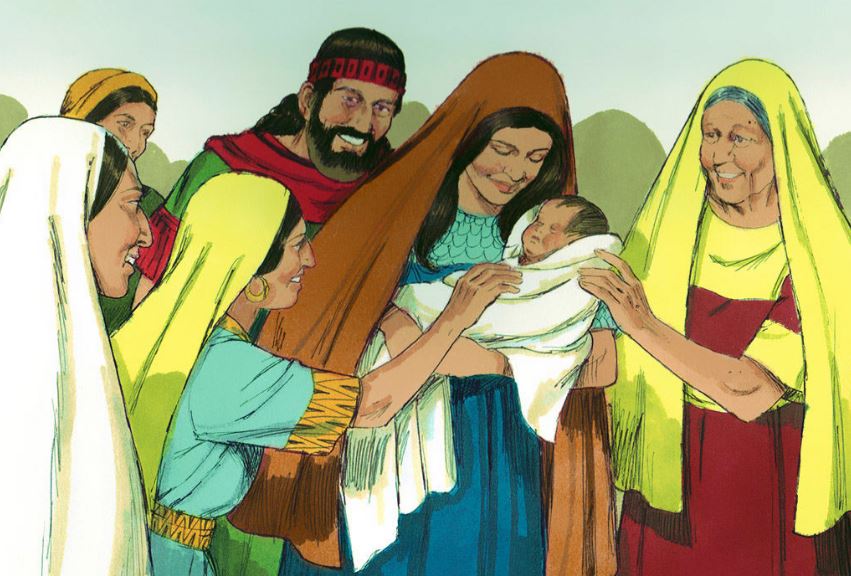 Boaz and Ruth married and were very happy together. Soon, Ruth gave birth to a son. She named him Obed. Obed was the grandfather of David, the greatest king of Israel. Ruth's goodness to her mother-in-law had been rewarded beyond anybody's wildest dreams.