Weapon of Mass Destruction (WMD): A weapon or device that can kill or harm on a large scale.

There are three main categories of WMD: 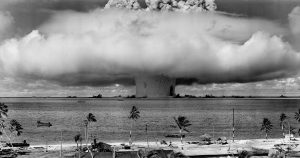 Many people condemn the use of WMD, however, others point out that there are some benefits.

People who criticise them claim:

However, others claim that, whilst not ideal, WMD can have advantages: