All Christians care about people, particularly those who are suffering and living in poverty. As such they often get involved in charities that support struggling communities, regularly donating money to them. 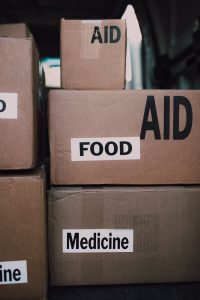 There are a number of reasons for this attitude, including:

Alongside these teachings, different Church denominations also set out expectations for Christian attitudes towards helping the poor. For example, the Roman Catholic Catechism states:

'True happiness is not found in riches or well-being, in human fame or power, or in any human achievement… God blesses those who come to the aid of the poor and rebukes those who turn away from them. Rich nations have a grave moral responsibility towards those which are unable to ensure the means of their development by themselves.'

The Church of England has long fought to end poverty. At a recent Synod meeting, poverty in the UK was discussed, with the members urging the government to 'adopt an explicit policy of reducing the wealth gap between the rich and the poor and the disadvantages that flow from it.' (November 2021)

It is important to note that Christians believe that it is OK to be wealthy as long as some of the money is used to help those less fortunate.